Dr. Ali Shariati was an Iranian revolutionary and sociologist, who focused on the sociology of religion. He is held as one of the most influential Iranian intellectuals of the 20th century and has been called the 'ideologue of the Iranian Revolution'.

This collection includes some of Dr. Shariati's most famous works, including:
- Hajj: A Reflection on Its Rituals
- Fatima is Fatima
- Where Shall We Begin
- And Once Again Abu-Dhar
- A Message to the Enlightened Thinker
- Islamology
- Expectations from the Muslim Woman
- The Visage of Prophet Muhammad
- Mission of a Free Thinker
- The Philosophy of Supplication
- Reflections of a Concerned Muslim on the Plight of Oppressed People
- An Approach to the Understanding of Islam
- A Glance at Tomorrows History
- Martyrdom
- Jihad & Shahadat
- Reflections on Humanity
- Extraction and Refinement of Cultural Resources
- The Free Man and Freedom of Man
- Red Shieism vs Black Shieism
- Horr
- Norouz
- Mohammed Iqbal
- Selection or Election
- One, Followed By An Eternity of Zeros 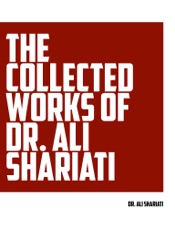