This is the tragic story of the Titanic, the biggest and most luxurious ocean liner the world has ever seen, which sank on her maiden voyage in April 1912. Follow the fateful voyage of this world-famous liner through vivid original artwork, discovering how she was built and equipped, and what kind of passengers and crew she carried. This new eBook contains interactive zooming features to illustrate where the Titanic is on her voyage and a gallery widget showcasing incredible photographic imagery of the ship, its construction, its lavish interior, a taste of life onboard, and the aftermath of the disaster. Experience the history of the Titanic like never before, watching the sinking ship in its 4-step sequence and listening to the distress calls made from on board. Explore it all, with a 3-D model of the Titanic at your fingertips. Watch newsreel footage documenting the Titanic being built, the ship's launch, and relatives waiting for news of the survivors. Story of the Titanic takes a closer look at the passengers and crew of the Titanic, following their different fates from the exciting start of the voyage to its tragic end. 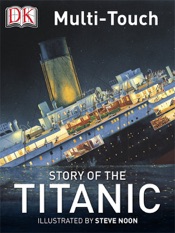