Windows. MacOS. Gnome. GUIs (Graphical user interfaces) have been the mainstay of home and office computers for nearly 25 years. Before that there were DOS and the Unix command lines. For most users, the mouse and the attractive, colorful user interfaces offered were more intuitive and easier to learn that the cryptic keyboard commands needed to do most tasks on text-based interfaces. For most people, GUIs are still the best way to go. Still, many of us want more performance, more efficiency, and (arguably) less complexity that can only be found through the keyboard.

This book focuses on getting as much as possible done through non-graphic, non-mouse means. This means the keyboard and the text-mode screen. This means working from the command line and through text-based, non-graphical interfaces. It could mean working with older hardware, but it doesn't have to. Whether you're running on the newest I9 processor, a Mac, iPad, Android phone, Raspberry Pi, or some kind of remote terminal, you can make this happen. Actually, the flexible hardware options are just one more reason to make this switch. Can you make the switch from a $2000 Apple laptop to a $35 Raspberry Pi? Well... maybe. This book is here to help you find out. Even if it turns out in the end that you don't want to totally switch to text exclusively, the tools and tricks you learn here can still be used from within a terminal in any GUI system.

So what do I mean by "Going Text" in this context? This means we'll be working from a command line, using text-based Unix/Linux-based software. We're going to almost entirely quit using the mouse. We'll be using these command line tools from within Windows, MacOS, or Linux terminal apps, or on other devices by using a terminal program logged into a remote server. As I wrote this book, my alternate titles were "Going Command Line" and "Going Terminal." The final product is a bit of a mash-up of all three ideas.

The book will help you get to a command line via one of the following:
On a Mac Using Terminal or iTerm2 (and you have Homebrew installed)On Windows 10 using Linux Subsystem for WindowsOn any PC using LinuxOn Windows using PuTTY to SSH to a remote serverOn any device using a Chrome browser and Secure Shell to SSH to a remote serverA smartphone or tablet using some kind of SSH App to connect to a remote server
Once there, we look at Package Managers, Tmux, Ranger, and Midnight Commander as general-purpose power tools, then get into specific task-oriented tools for reading email, writing, spreadsheet work, notes, security, password management, web browsing, social media, graphics, audio, video, news, weather, books, task management, coding/web design, and more.

There are conceptual overviews of Markdown, LaTeX, Vim, and Todo.txt systems for work. 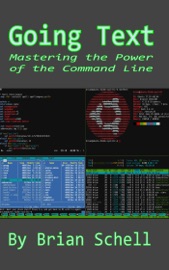