His best in one volume, Clive James On Television includes all Clive James's treasured TV criticism, originally written for The Observer between the years 1972 and 1982.

From the 1972 Olympics to the 1982 Eurovision Song Contest, here is a decade of the most trenchant, witty and thought-provoking criticism of any kind, with a foreword from Clive James himself, described as 'the funniest man in Britain'.

This volume incorporates three collections: Visions Before Midnight, The Crystal Bucket and Glued to the Box. 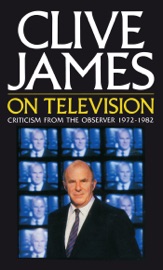